“The E-Comm radio network provides first responders with significant safety improvements through increased area coverage and audio quality,” said Fire Chief, Rory Thompson. “Prior to the changeover, City fire and bylaw staff used a single repeater on top of Cascades Casino. There were areas in the City where first responders had limited radio coverage. Often, crews had to exit a building in order to reach our dispatch. The new radio system has solid coverage across the whole city. Apartment block parkades and elevator shafts no longer limit our radio coverage.”

The E-Comm operates the largest multi-agency public safety radio network in British Columbia. The radio system consists of seismically reinforced radio sites across Greater Vancouver and has portable trailers for emergency use. The system serves 19 municipalities in Greater Vancouver including the RCMP and BC Ambulance Service.

Mayor Ted Schaffer is excited about the new radio system. “For the first time, police, fire and ambulance responders can talk to each other about the same incident. This will enhance the City’s ability to cohesively respond to any emergency including a large scale disaster.” 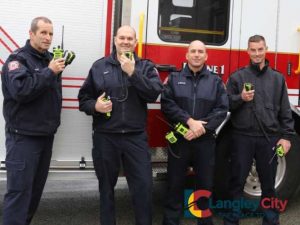